After a most wonderful week photographing the 2012 WFDF World Junior Ultimate Championships in Dublin, my sights are refocused. Refocused from shooting a great week of sports and making new friends at the tournament and in the city pubs. Refocused to the big city. London.

London. What can you say that’s already not been said? Okay, tending to my new Dubliner friends, maybe the words are not always so complimentary. Even my last cabbie of my trip, all of whom were wonderful, two of whom got lost in their own city, told me the history of the street we drove on towards the airport, Collins Avenue and Michael Collins. His voice kept getting stronger and I feared more angry as he explained the fate of this early age IRA leader, not to be confused with the IRA of more recent history who have included acts that have killed innocent people.

Anyway, I’m now in London. London is such a big city, it’s hard to know where to begin. I knew I could not do it in a day. So thankfully, I’ve given myself a few days to try to take in this town for the first time.

I browsed some books, but more often than not, I find talking to people is a great way to enter a city. Thankfully, one of my new friends I met covering the Ultimate event helped me to enter London. And how we met is fitting to such a role. You see, upon arriving in Dublin last week, seeking my way to find the Ultimate venue, I happenstanced upon Karen, team coach of the Australian U20 Women’s team. Karen overheard me asking for directions to the pitches (fields) of the tournament on the Dublin City University campus. She kindly offered to not only provide directions, but guide me there. After trudging more than an hour from the airport via bus and walk with my 40 pound backpack of photo equipment, a side bag with my laptop and my two week supply of luggage (actually compacted as one week), I was more than pleased to have someone point me in an efficient direction.

So on Saturday, the last day of the tournament, Karen and I got a chance to talk a little. She too carries a camera and we photo types tend to find one another. When I told her I was heading to London, she told me of her blog of visiting London by area, based on living there for a couple of years. Karen’s never steered me wrong, so I was confident her blog would be my wayfinder once again. It was confirmed when her top points of interest matched up with my own independent list!

So away I went today. And how fitting. My first encounter with was Australia House. 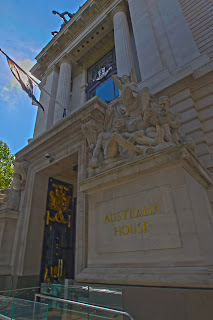 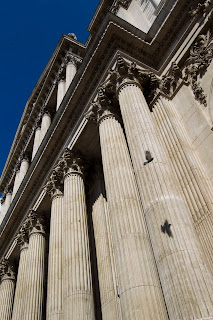 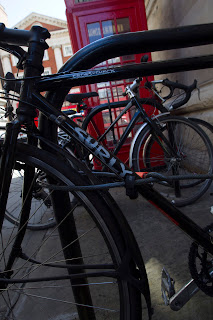 From there, I followed Karen’s directions and walked eastward to St. Paul Cathedral. I admit. I’m partial to St. Paul. No, I’m not Catholic and have no idea what patron Saint he was,if any.  But my middle name is Paul (as in Sir Paul) and I live in the Twin Cities of Minnesota and St. Paul is our State’s capitol.

From St. Paul Cathedral, it was southward to Millenium Bridge. I literally chucked when I read Karen’s blog post, “It’s just a bridge.”

Agreed. No reason to set too high expectations here. But personally, I happen to love bridges. They have meaning, hopefully, in both form and function. And beautiful bridges can bring people together in ways that not only bring differences together, but celebrate our likenesses. So here is one view of Millenium bridge from the perspective of how it can creatively enable movement both horizontally and vertically to connect us.

And connect them they may. Sitting nearby this bridge was a lovely couple. Tom, and, well, she was too shy to say. They agreed to my taking their photo. And what attracted me was that I loved the background as much as the foreground! (I’ll send a copy to them.)

And then, yes different, but perhaps better described as real oddities (e.g. “scary!”) appear too.

Walking on, following Karen’s agenda, I headed eastwards and a bit southerly to the market. Smart move. Grabbed some chibata, cheese and bottle of wine that gave me a reason to sit on the grass and watch the world go by, with the Tower Bridge as the backdrop.

I did my duty of taking photos of many a couples and families. “How much?” a woman asked. “No, your camera, I tried to explain, with her English literate son translating for us.That in itself was a joy. (People tend to ask those with bigger cameras for help, and if the camera they are using is too small, it’s quite intimidating to know how to actually use it!)

Sure it’s large. But like anything that is big, it’s often big because it’s made of many small things. I see London as very approachable. Approachable if it’s undone, taken apart, savored in bits and pieces. Better that than trying to jam it all down in one sitting. I appreciate I’ve got a few days here to let my own system digest it in parts. I expect it will only leave me hungry for more.

This site uses Akismet to reduce spam. Learn how your comment data is processed.